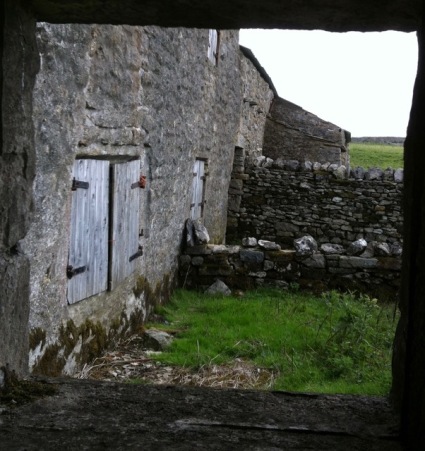 Perhaps it could be advertised as ‘lacking basic amenities’ and, there being a large piece of roof missing, ‘might suit astronomer’. It was a bothy once. Not one of those for well-dressed walkers but just a place for wet shepherds to hide from the weather. Even shepherds wouldn’t touch it now. It suited Jack though: he could kip in the dry bit and eat his bit of scran when he had it. There was a sign outside:

‘Visiters Not Wellcome’, it said. If anyone failed to get the message and ventured too close they would hear a loud, gruff, ‘Bugger Off’! It usually did the trick.

Jack was only Jack to himself. Everyone else called him ‘Scar’, there being a livid reminder of his youth on his right cheek, running up towards his eye and visible above his unkempt beard.

Every other day Scar would stump down to the village shop to buy some bread, cheese and a bottle of whisky. The occasional queue would part to let his malodorous presence out of the shop as quickly as possible.

That was the limit of his conversation.

His nickname was unkind but it grew to common usage through sheer frustration in the village. He had fought against his parents, his teachers, his classmates and those workmates he had during his short-lived periods of employment. He reached the conclusion that everyone was against him though, more likely, it was the other way round. Eventually, reaching the end of the World’s tether, he retired to live in his hovel in what used to be called Westmoreland. On fine days he would sit in the sunshine, thumbing through his only book: one with pictures of British birds. It was dirty and dog-eared but then, it suited him.

He would see occasional walkers but they knew not to venture too close. He’d achieved a little notoriety in a regular publication for walkers and, as a result, some sought out his hut and photographed it. A lucky few even captured Scar sitting outside, raising a two-fingered salute. Though he didn’t know it, pictures of Scar and his two fingers began to spread on social media. If there had been such a thing as anti-social media that might have been more appropriate but Scar knew nothing of social media, or any technology after about 1982.

He’d only been to the shop on Wednesday so the shopkeeper was surprised to see him again on Thursday. He burst through to the counter.

“Get on phone. Lass in trouble. Fell from Black Cliff into gully. I’m goin’ back.”

He dashed out of the shop and ran up the hillside like a man in his twenties.

She lay as described in a gully below the cliff, her climbing rope fallen like spaghetti on top of her. Jack listened for her breath. It was faint but present. He’d better keep her warm. He knew not to try to move her. He took off his old jacket and laid it on top of her.

He knew she was unconscious but still he began to speak.

“There now lass, you just lay there, help is comin’. What you doin’ up here all alone anyway? Pretty girl like you should be home with a man. Aye. Did I tell thee? I used to have a girl once. Pretty she were, like you, but she went off with Ted Armstrong. That were a fight, I tell thee. How I got cut bad. Anyway, I suppose she’s better off. I’d have given her a hard life, or mebbe she’d a turned me round. It’s too late now anyway.”

He paused, lost in thought for a while then, suddenly…

“Hey, over there: can you see that? It’s a dotterel! Never seen one before up here. It’s in me book. Well maybe it’s a sign. Now you just keep breathin’ steady lass. Kate, her name was. She was about your size. We used to go walkin’, not all dressed up like folk today; we’d just wait for good weather and take off. Best days of my life but I had this temper see. Was always fightin’ an’ she hated it. After that, well, I couldn’t take to anything or anyone. Better up here, out of the way.

He kept talking all the time as the helicopter landed on a gently sloping patch about two hundred yards away. Two men rushed up with a stretcher.

“Nay, wish, er, there were a dotterel up on that ridge you know.”

“Nothin. I reckon she’s safe now. Pass us me jacket.”