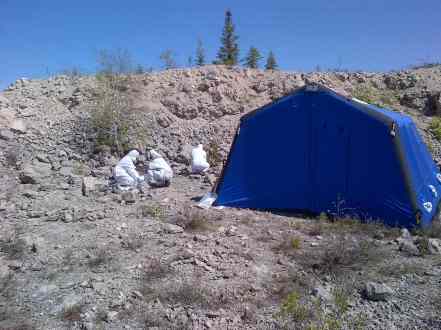 The hill itself is low and massy, flat topped, brooding, disappearing in mists, treacherous with bogs, run through with fast-flowing streams. I grew used to it, and its moods in the autumn. The break of slope part way down shows where hard Cambrian quartzite gives way to Ordovician shale but that’s not nearly enough for my final submission. Every stream, every foxhole and every bit of outcrop has to be hammered to identify the various types of rock in the area; and there are plenty. The quartzite dips to the South East, is cut here and there by dolerite dykes and leans against an earlier granophyre intrusion. The shale has graptolite fossils throughout and is intruded by a lamprophyre sill. Oh, and there’s a rhyolite extrusion as well, also cut by dykes. It’s a jumble, which is why I’m still mapping now the snows have started to melt.

Yesterday I followed a stream towards one of the farms. They don’t like trespassers so I made sure last October that I knocked on every door and explained what I was doing. Jim and Marlene were great: brought me in for a cup of tea and I made friends with their dogs. They told me to go where I pleased and they’d keep an eye on me; said there were some unsavoury characters from the town now and again and it wasn’t always safe for a woman alone. They usually knew who was where on their farm and they spread the word from one to another. I felt a bit better after that but I chose this life: the cold, the occasional wet feet and the stinging rain for the thrill of discovery and the feeling of achievement that comes with the final write-up.

The upper part of the stream was quartzite. Well, I say quartzite because that’s what the quarry men called it, because it broke like sugar mice, but it’s really a hard arkose sandstone. There were the usual dykes, duly noted and mapped and then the stream broadened and slowed as it entered  the softer shale. There was a steep bank to one side of the stream which looked to have been disturbed. That’s when I noticed the flies and the smell. I thought maybe an animal had come to grief there and it wasn’t a nice place to hang around so I plodded on through the water and the buzzing. There was a shoe sticking out of the soil.

It was a half-hour walk back to the car. I needed to think. I must have sat there for ages, drinking tepid coffee from my flask and deciding what to do. In the end I drove to Jim’s farm and beeped the horn, trying to sound as matter-of-fact as I could.

“Where did you say?” Said Jim, “In that stream below the field with the cows?”

There was something about the way he reddened and looked at Marlene.

There’s a tent over that bank today and a people in white overalls. Jim and Marlene are at the police station.

I think the rest of that stream bed is just the Ordovician shale so I’ll mark it as such. I need to get this report in before April.