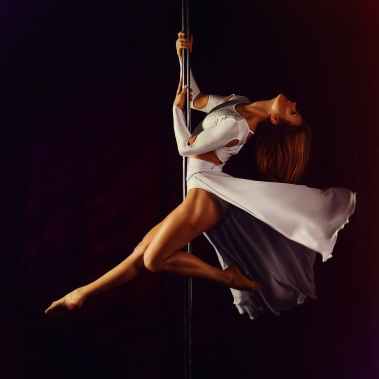 Photo by Pixabay on Pexels.com

Charlene Entwhistle swung around her pole. She loved to practice.

Each morning, she would spend an hour or so on her exercises. First the yoga to warm up, then the pole and finally the floor and weights that got her body closer to the shape she sought. A priority at the moment were the glute exercises that were giving her the kind of butt that was essential these days (Kim Kardashian was not going to have it all her own way!).

She had left school at sixteen and hadn’t much money to do the things she saw girls on Facebook were doing. The money she managed to get at the Turkish Kebab shop & a few more hours cleaning at that scruffy hotel behind the Odeon, weren’t going to get her a Hollywood lifestyle. She had heard about pole dancing and watched videos on YouTube but how was she going to practice without a pole? Early attempts in the lounge with one of Mum’s old curtain poles wedged in place with a few books, didn’t last more than a few seconds. She landed on the coffee table, which promptly collapsed! She was frustrated & Mum was livid!

The breakthrough came when a few weeks later, Dad decided the roof needed re-tiling and had scaffolding erected. The pole on the corner at the back was perfect! And a couple of hours cleaning & polishing later, she had a real shine on it and had started her exercises. It was perfect and Dad being Dad, always had another job on and the scaffolding stayed for months! Being round the back, it was private – well except for the old fella who lived in the house behind.  She could see the dirty old git peeking around his bathroom curtains!

A few months later, all was going well and she got an audition at a shady little club. In a basement under a betting shop, it was open all hours and they said they’d be flexible. She’d have to fork out for a few better clothes (well, the few she would start her routine with) but they did insist that she found herself a better ‘stage name’ if she was going to draw the punters in. There was no wage, she was told she would be self-employed but she could keep the tips she got.

All excited, she rushed back home. Seated in her tiny bedroom, she did her long honey-red hair in what she thought was an exotic style, spent another hour or so on the makeup until she thought that she had the look just right. But what about the name? She had always loved the name Dolores, so that was easy. But she couldn’t call herself Dolores Entwhistle!  Then she had a brainwave!

She remembered Google Translate, entered ‘golden’, decided something Spanish might have the right ring to it and hey presto, ‘dorada’ came up – perfect! Dolores Dorada! What a wonderfully, exotic name!

The club was pleased & sensing her potential, billed her as ‘the internationally renowned Dolores Dorada’. She was thrilled. The first night went well, apart from the wandering hands she had had to smack away (with a wink, of course). The tips she had tucked away were almost as much as she got from the Kebab shop & the cleaning combined! Friday and Saturday nights were fantastic and she soon decided greasy kebabs and cleaning were now a part of her past.

Some of the other girls were a bit snotty with her but nothing she couldn’t handle. But she clicked with one of the girls (Sexy Suki) and it wasn’t long before they decided to get a flat together. They then got their very own pole and Sid (one of her Dad’s team) had fitted it for them.

Suki was a bit more of a dab hand at the internet and suggested that they could earn even more making ‘live’ videos (and earn from the advertising). Soon Suki & Dolores had a massive following on YouTube. When she had learnt about the new job, Mum said they were demeaning themselves. Dolores shrugged it off. She thought what she was doing was liberating and empowering, so there!

“Gentlemen friends” came (and went) in a continuing flow.  Neither girl seemed to have the time to devote to any one particular boyfriend. Full of confidence the two started auditioning with some of the more upmarket clubs in the city centre. It wasn’t long before they were both doing regular work at a couple of these and raking in the money with ‘private sessions’.

One night, Dolores’ last client was a handsome, foreign looking chap with a thick accent. He introduced himself as Jan (but Dolores thought he might well be Russian. She had met some Russian chaps before and was familiar with the accent). After a couple of sessions, Jan had invited her out to dinner. Deciding she liked him, she agreed. It was one of these very snooty, modern restaurants that had a seemingly endless number of dishes composed of lots of unidentifiable bits of this and that surrounded by different coloured skid marks. She clearly wasn’t going to be able to ‘fill her boots’.

A couple more dates and she began to feel quite pleased with her new man friend, although despite her best efforts, he remained a complete mystery. The best she could get from him was that he ‘was involved in international sale’. She thought he was rather sweet and on their next date, when he asked if she would do him a small favour, she agreed, ‘So long as it’s nothing illegal!’

They laughed together as he reassured her.

‘No, no. Back home we have national funny day, two days’ time. Long tradition, everyone take part.’

Jan went on to explain that he had an old friend who lived nearby. ‘Part of tradition, like your “tricky treat” day, we put funny juice on doorknob. Can’t see for day, but then goes red and very itch! Big joke!’

‘Ah, mustn’t see, spoil funny. Not know I am in England. I will see next day, big laugh & then we drink much vodka! You do for me?’

Dolores agreed and he passed over a very small scent spray bottle in a plastic bag.

‘You wear glove. Not to get on hand…unless you want itchy and go red, eh? And not to see you, afternoon is best, yes? You can throw bottle away somewhere. Best for bin of dust.’

They laughed together again.

‘Now must go. In morning, have big business meeting early. See soon, yes?’ Later the following afternoon, she drove over to the address on her way to the club. She was pleased to see that the street was deserted. Halfway to the front door she realised that she had forgotten her washing-up gloves.

‘Sh*t! Never mind, I’ll just have to have a itchy, red hand tomorrow!’ Dolores gave the door knob a good spraying. She threw the half empty bottle in the neighbour’s wheelie bin and drove off. When she got to the club, she washed and changed and thought no more of it.

Much later that night, Dolores was taken very ill. Suki decided that as it was Friday night it would be quicker to drive her to A&E than wait for an ambulance.  As her car was blocked in, she used Dolores’.